Tehran rugs are a type of Persian rug woven in the capital of Iran, located in the north central region of the country. Rugs began to be produced in Tehran, in the late nineteenth century to early 20th century. They tended to be made with classical Persian designs of medallion and allover type and sometimes with pictorial motifs. And even though Tehran has not long been a center of antique Persian rug production, it did not take long for the Persian capital to develop its own high standard in making carpets with designs of classical Persian derivation, on a par with other centers like Tabriz or Kashan.

Tehran became the official capital of Persia under the Qajar Dynasty in 1795. Tehran carpets from the turn of the twentieth century, which were produced on a limited scale, are known in the antique carpet market.

During the 1940s the production of Tehran carpets was discontinued. After World War II, however, the city of Varamin, located near the capital, began to produce similar carpets that were marketed as Tehran carpets.

Tehran markets have the largest inventory representing carpets and rugs from all over Iran. Hundreds of new and antique rug dealers work tirelessly to bring merchandise of all styles and qualities to Tehran for the wholesale trade. In addition, many carpet galleries throughout the city service the domestic market. After World War II, Tehran wholesalers from all ethnic backgrounds, as well as Muslims, Jews, Armenian Christians, and others, contributed substantially to the worldwide foreign export of Iranian rugs and carpets. Some famous exporters were Avakian Brothers, Banilevy Brothers, Bolour Brothers, Bonakdarian Company, Etessami Brothers, Houshiar Company, Jahda Brothers, Karmely Brothers, Levian Brothers, Momeni Brothers, Roubeni Brothers, Shahkery Brothers, Yacoubi Brothers, and Yamin Brothers, all of whom greatly contributed to the successful introduction of Iranian carpets to the Western markets. Also the Tehran production may claim at least one famous master weaver, Seyd Abolfat-Rasam Arabzadeh.

Tehran carpets have a cotton foundation and a wool pile. In rare instances, silk was employed for design highlights.The beautiful Tehran carpet tonality is particularly apparent in their red, light blue, and gold fields. In addition to these colors, dark blue, ivory, green, coral, and brown are used in the design motifs and outlines, borders, and, occasionally, in the background. The Persian (asymmetric) knot is used. The sizes found in the market range from approximately five feet by three feet to twenty feet by fourteen feet, and the rugs are woven in grade qualities of very good to fine. 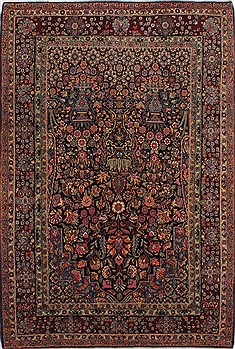 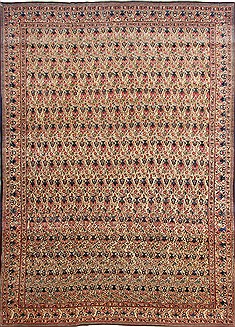 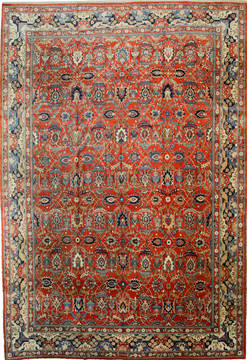