Ghoochan is a small town in Northeast Iran, in Razavi Khorasan province. The town itself is located just nourthwest of Mashad. As a result, all of the rugs of Goochan are marketed there. Although these rugs resemble tribal motifs, the quality of the weave is magnificent. Many of the small towns of Khorasan have managed to keep the integrity and quality of their rugs alive. Much like all other parts of Iran, rug weaving is a tradition that has lasted for thousands of years. To many craftsmen and weavers, rug weaving is not only a talent, but a part of Iran's heritage. The main colors in most Goochans include a rich burgundy, and a deep indigo, as well as accents of beige, taupe, olive green, and occasionally teal or baby blue. A brilliant addition to any room and an exotic artifact resembling a genuine tribal way of life, the rugs of Goochan will bring enchantment to any home.

The Persian province of Khorasan, a pre-2004 province of Iran, subsequently divided into: South Khorasan Province, North Khorasan Province, Razavi Khorasan Province. It was the biggest province in Iran and stretched along the northeast of the nation. Many beautiful rugs come from this area of Iran. The capital city was Mashad (today is the capital of Razavi Khorasan), which is also where most of these rugs are marketed everyday. Some other rug producing centers in this region were Kashmar (Turshis), Mood, Sabzevar, Ghain, and Birjand, most of which are situated very close to Mashad. Many Baluch type rugs are also woven in this province by Baluchi nomads who inhabit the areas more to the south (South Khorasan Province). In 1722 there was an Afghani Invasion into Iran. This left the country in a state of political confusion for many years, and the rug industry in a state of disorientation, especially in well established areas such as Mashad. However, despite the mass invasion, Khorasan along with many other regions were able to get back on their feet and so the rug industry started up again as the royal courts of Iran did everything in their power to bring this great art back home. Many times, Kings of Iran such as Shah Abass would seize and destroy low quality carpets and those with inferior coloring techniques to make sure the integrity of this ancient Persian art wasn't lost.

There are many grades of handmade rugs produced in this vast Persian province of Khorasan, ranging from medium to fine. All however are very sturdy and indestructible. The carpets woven inside of the cities, such as Kashmar, Mashad, Mood, Sabzevar, and Birjand are usually better quality than those woven by the nomads in the area. Although it was originally the nomads who wove these rugs for their own use, the cities adapted the talent and perfected it into an art. Almost every color can be seen in various rugs of this type. Almost all of these rugs have a pile of all wool, and a foundation (warp and weft) of cotton. In extremely rare cases, silk may be seen in these rugs as part of the pile, foundation, or the entire carpet might be made of silk. That is very unlikely unless you are dealing with much older pieces from a couple of centuries ago. The wool however, is very lustrous and soft and is exclusive to the people of Khorasan. This fine wool, along with beautiful designs and genius craftsmanship, combine to produce these exquisite carpets. 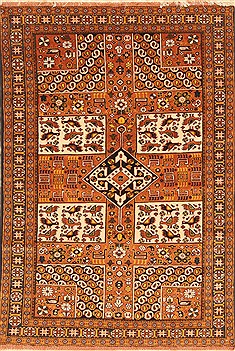 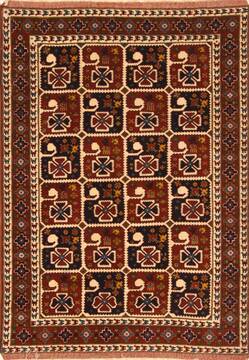 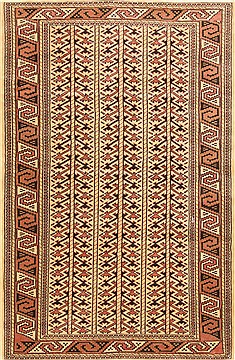 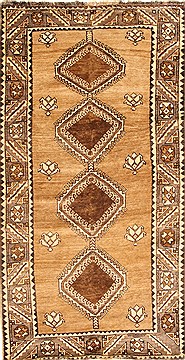 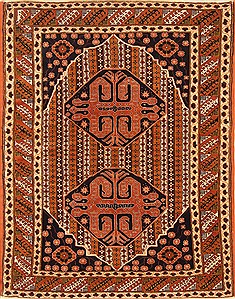 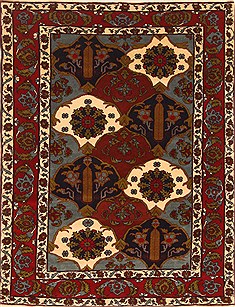 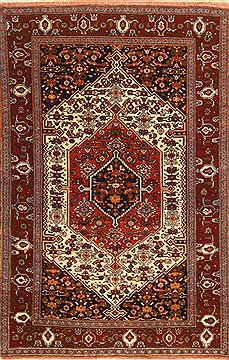