Nahavand is a Persian tribal rug hand-woven rug, made by in the village of Nahavand, which is north of the town of Hamedan, in Northwestern Iran. Most of the Nahavands made are about 5 feet by 8 feet. They don't usually come in very large sizes because the weavers use simple horizontal looms on the ground and it is extremely difficult to construct bigger rugs. They feature floral spray designs and geometric patterns, often in a rust or reddish salmon color. The fame of the Nahavand is greatly due to the quality of the wool used to weave it. The thick soft and lustrous pile always shines under the light. Most Nahavands are soft enough for a baby to sleep on. This is a one of a kind hand made tribal rug, which has no duplicates anywhere.

Hamedan is an ancient Persian city (the second oldest city of Iran), which lies at about 6500 feet above sea level in the rugged mountainous region of northwestern Iran. It has a rich history, which dates back many centuries. The city itself, along with the countless villages and districts surrounding it, produces a good portion of the tribal rugs of Iran. Some areas around Hamedan include Chenar, Derjazin, Hussainabad, Nahavand, and the Kurdish districts of Khamseh, and many others, that are between Arak and Hamedan. All the rugs produced in the surrounding area of Hamedan are marketed inside of the city. There can be seen obvious traces of Kurdish and some Turkish influence on the people of the province of Hamedan, which is just east of Kurdistan. The peaceful people of the province of Hamedan have managed for several centuries, despite all the greedy foreign invasions, to keep their precious talent of rug weaving alive.

The rugs manufactured around the city of Hamedan are all handmade, with the pile being entirely wool, and the colors being mainly natural vegetable dyes. Very rarely if ever, is silk seen in rugs from this region. The foundation of the rug (warp and weft) is usually cotton, and in some cases goat hair. The patterns are usually simple geometric arrangements with primary and vibrant colors. Sometimes small animals or garden elements are seen and sometimes the famous Herati design is implemented. These rugs are overall very good in quality and most of them have been known to last surprisingly long periods of time. 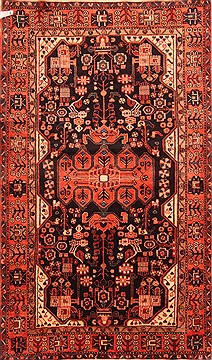 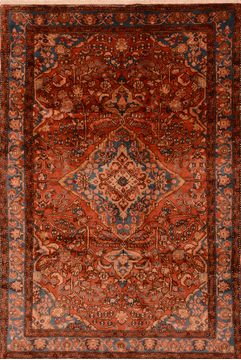 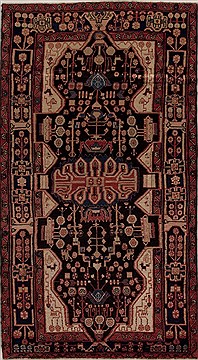