Viss is a small town near the city of Hamadan. The Viss rug has a very distinct pattern. This includes a bold hexagonal central medallion, with two smaller diamond shape sub-medallions to the top and bottom. These are placed in open field of a solid color, most often red. And navy is used to create the borders with hints of beige throughout.

Viss rugs originate from Viss, also referred to as Wiss, a small town located near Hamadan. However, for a small town, Viss has an eclectic mix of population. Kurds, Turks, and the nomadic people of Bakhtiari all call Viss home, and it is the influence from these diverse groups that is an integral part of the weaving of wool rugs here. Due to its largely nomadic population, the majority of Viss rugs feature geometric designs, which is an indication of a tribal rug. Its location so close to Hamadan has influenced the local weavers to create their wool rugs using the Hamadan weave, also referred to as the Sennah Baft. These wool rugs are woven with a Turkish symmetrical knot and a single shot of weft between the rows of knots.

Historic Hamedan is an ancient Persian city (the second oldest city of Iran), which lies at about 6500 feet above sea level in the rugged mountains of north-western Iran. The city itself, along with the many villages and districts surrounding it, produces a good portion of the tribal rugs of Iran. Some areas around Hamedan include Enjelas, Chenar, Derjazin, Hussainabad, Nahavand, and the Kurdish districts of Khamseh, and many others between Hamedan and Arak. All rugs produced in the areas around Hamedan are marketed inside the city. Located just east of Kurdistan, obvious traces of Kurdish and some Turkish influence can be seen on its peaceful people who have managed, despite centuries of outside interference, to keep their special talents alive. All rugs have a wool pile colored with natural vegetable dyes. Very rarely is silk seen in this region. The foundation of the rug is usually cotton, and in some cases wool or goat hair. The patterns are usually simple geometric arrangements with vibrant primary colors. Sometimes small animals or garden elements are seen, and often the famous Herati design.

The single most defining characteristic of Viss rugs is a very unique center medallion, which is a rounded seven sided geometric shape that always has pair of jewel-like shapes at either end. In order to showcase this unusual design, Viss rugs most frequently have a red background and a large and intricate border. Other design elements in Viss rugs including the famous Herati motif, small animal figures, and a garden design are all variations of designs that are commonplace in the neighboring villages. The dominant colors used in Viss rugs are dark red, khaki, light blue, dark blue, and ivory. All of the dyes are created from the local vegetation.

The foundations on Viss rugs are cotton, although silk may be found on a very rare, old rug. The wool used to weave the pile is extremely thick and durable, giving these rugs the probability of lasting for centuries. The majority of Viss rugs are mid-size due to the compact looms. These boldly designed and dramatically shaded wool rugs will give any room in your home a look of polished elegance. 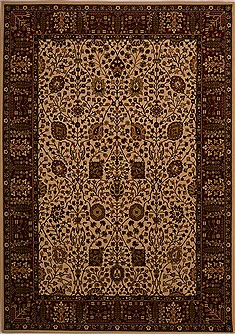 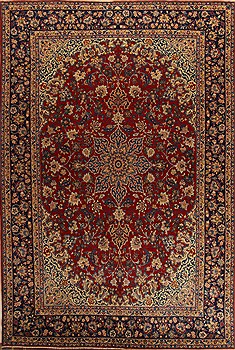