Malayer rugs are authentic hand-woven Persian rugs, made by semi-nomadic people living in the Malayer district near Arak, which is in Northwestern Iran. The central field of the rug usually has an intricately patterned medallion that is understated and not overwhelming to the overall design. The coloring is predominantly shades of red and the field patterns and border motifs seem to be almost interchangeable. However, geometric patterns are also found in these rugs and many other colors besides red are seen. Obvious traces of Kurdish origins are seen in these rugs. The Malayer is a beautiful floor covering and a smart way to enhance the decor of a room.

A very important rug-producing district in Iran, Arak (formerly known as Sultanabad) and its surrounding area, is located in the Central Northwestern part of Iran, east of the province of Hamedan, south of the province of Zanjan, and north of the province of Lorestan in the province of Markad. Arak, along with its many neighboring villages, produces countless quantities of handmade Persian rugs every year. The finished carpets are usually marketed in the town itself. Some major areas around Arak are known as the Mahallat, Ferahan, and Lylyan. Some neighboring towns and villages are: Malayer, Meshkabad, Mirabad, Seraband, Sarough, Jozan, along with many other small Kurdish villages and settlements. There has been strong Kurdish influences on these people's style of weaving, and some traces of Turkish ancestry can also be seen. Arak is where The Manchester Firm of Ziegler's opened an office in 1883. Originally an importer of English goods, the firm soon realized the financial advantages of starting a carpet factory in this region to produce rugs to be marketed in Europe and the USA. It has been estimated that by the turn of the century, Ziegler controlled over 2500 looms at work in this district. The Mahallat produces a very high quality rug known as Mahal, and Sarough is also famous for producing exquisite pieces. Lylyans tend to look more tribal as do many rugs made in these surrounding villages. Ferahans are very recognized world over as a result of their high quality weave and rich history, and Serabands are very similar to Ferahans. Mirabad also produces a very high quality carpet, usually with an overall design, known as the Mir. All the rugs of this area are completely unique and one of a kind, but a striking resemblance can be seen within some of them. This entire area is very important and precious to the Persian rug community, and deserves the respect that it gets.

There are many different grades of rugs made in this region, ranging from medium to fine. All rugs however, are 100% handmade and authentic. The material used for the pile of the rugs is wool, with the colors being mainly vegetable dyes. The rugs are woven using asymmetrical Persian knots to tie each loop one by one. Although not uncommon in older or antique pieces, silk pile or silk foundation is rarely if ever seen here. There might be some cases where the rug has a pile of silk and wool blend. Cotton or goat hair is used for the foundation (more so cotton) and the wool of the rugs is hand spun usually from the weaver's own sheep. The Sarough is probably the most famous of all the rugs from this region and its quality is absolutely exceptional. The Mahal, Ferahan, Seraband, and Mir are also very high in quality, but that is not to say that the rugs from the other villages are inferior in quality. They as well are very durable and are capable of lasting an incredibly long period of time. 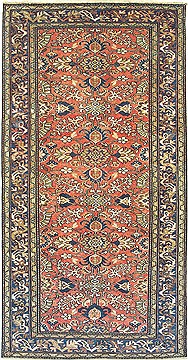 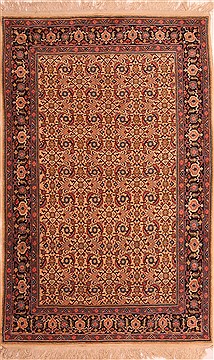 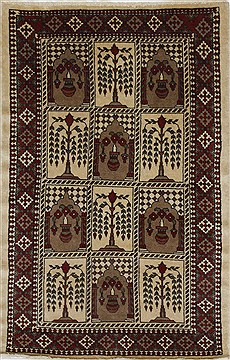 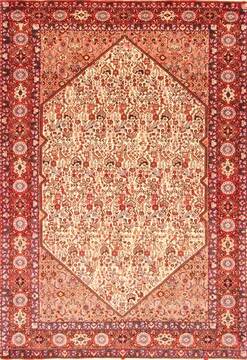 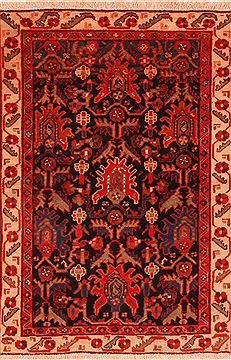 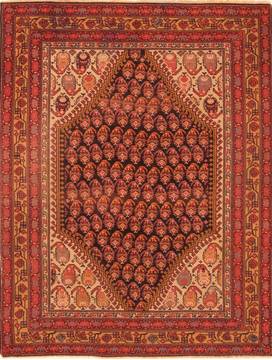